A happy relationship is a myth.Truth is that to keep the ball running is painstakingly tough.The facade behind the Facebook posts,pictureuploads and smiling faces is something no one else knows except the two people involved in the ongoing tussle. All couples go through some hair-ripping and teeth clenching moments, but there are some happy couples who focus on some particular Don’ts.

Yes you heard it right, Don’ts and not Do’s.

These are some particular Don’ts that happy couples follow to keep the spark alive,each day. Happy couples never keep count of their duties.They are oblivious to their daily chores yet they are not stickler for rules. The once in a while slip ups are obvious and the other person lets it off. If one is watching the sports telecast, the other quietly does the laundry even when it’s not her turn. Likewise, if she’s late from work, she will be greeted by the warm smell of a freshly cooked dinner.

Happy couples love to engage in talk that covers both of them. When relating their experiences to people about certain things, they use the words “We” and “us” rather “I”, “me” or “myself”.Their togetherness quotient is reflected by the sheer pride they have while discussing their collective thoughts.There are opinions that may differ at times,but then they learn to agree to disagree and enjoy the differences.

However small the issue at hand is, happy couples don’t sleep over their fights.Rather than taking the problem to bed and prolonging it till next morning,they talk over it.Of course if one is angry they do need a breathing time to cool down and reflect on the harshness of their voices but then they eventually come around.

4. They don’t count their chickens before they hatch. Happy couples don’t expect all of their hopes to be fulfilled.They realize that they are in charge of their own happiness and not the other person.The wife realizes that it is her dream to go backpacking for the holidays not her husband’s so she saves up for it.The husband knows that he wants to see the Grand Prix but doesn’t want to when his wife is expecting. They realize that dreams are meant to be there, some come true, others don’t.

5. They don’t think about the problem, they talk.

Lots of problems go unresolved when the couple keeps it inside.Most of the times the pent up is to avoid hurting the other person or to over aggravate the fight. Little do people realize that this results in tumultuous outcomes. Happy couples don’t keep their hassles inside, they vent it out.Of course the result might not always be great and may hurt the other person, but for the sake of a fruitful relationship,it’s vital.

6. They don’t argue, they discuss.

Fights are an inevitable part of a relationship and we know that. If you are not fighting there must be something wrong with the way you two behave with each other. Tiny differences are allowed for the loving make up sessions that follow. Happy couples have a trend of keeping it low when they fight, instead of arguing with each other, they reason and see the other side of the story.Of course at times it’s difficult to listen to the other person’s outbursts but they still do.

7. They don’t make a mountain out of a molehill.

Happy couples stay away from the melodrama and underplay their issues.They learn eventually to avoid noticing the mistakes that their partner has made and focus on the positives sides.The wife ignores that her husband missed helping her with the laundry as he was talking with his friend over the phone.The husband eats the half baked cake anyways as he knows the wife had too much work on her hands.

Life is too short for lies especially with the person with whom you are supposed to grow old with. Sharing a roof, they are going to find out about it eventually.Happy couples keep the cheating stuff off the table.They don’t cheat their partner in anything, may it involve a mere phone call or planning for a trip. Being blatant is way better than lying only to break your promise at a later date. At the unfortunate event of the marriage not going anywhere, they tell their partners up front rather than date another person simultaneously.

They deal with things or chores before they get too ugly. Whether it is about doing the dishes, booking the movie tickets, planning for a trip or discussing about the expenses, they prefer to do it right away when the thought is fresh in their minds. Also delaying the tasks at hand might be offending to the other person.

Happy couples have two simple rules concerning family. They don’t drag the family into fights and they don’t compare one another to their family members. Fights are concerning both and they remain confined within the four walls of the room. Happy couple’s families are blissfully unaware of the problems. Neither do they use statements like “Why don’t you cook the food the way my mother does?”.

Happy couples recognize that self pity and self loathing gets you nowhere. Instead you are despised by the other person.In the event of a fight, happy couples never say things like “You are so cruel to me” or “”What did I do to deserve this?”. At times their emotions get the better of them, but they still try to keep it subtle by changing the topic or asking the other person calmly what made them react this way.

12. They don’t cling on,they give space.

Happy couples love doing things together that they enjoy. But they recognize that they both need individual moments of glory, too. There are some things that you enjoy that they other person doesn’t. Instead of clinging on and coaxing the other person to do what you want, you have to encourage your partner to do what they want.People in a happy relationship don’t give up their dreams, neither do they let the other person forget theirs.

13. They don’t always have their way.

Happy couples recognize that in relationships sometimes you need to think more about the other person than about yourself. They focus on giving rather than receiving. As a result the other person always feels comforted that his or her interests and thoughts matter.

14. They don’t find life OK, they find it awesome.

Happy couples always have something to look forward to .Of course life does get monotonous at times but they pep it up with surprises, vacations and friday nights.When questioned by others how life in general is they always say “It’s Rocking”. 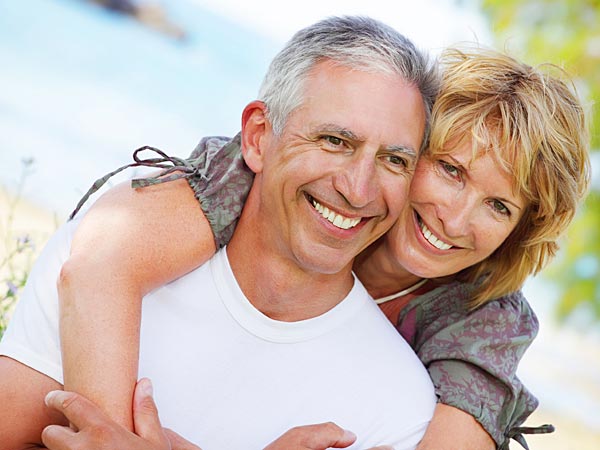 Everyone goes through a rough patch but happy couples really know how to pull it all together.Maybe they are having endless discussions without reaching a solution.Maybe they are not agreeing on the new school that their daughter is about to join. Or maybe their work lifes are driving them crazy. But they never stop trying to find compromises.

Lastly, happy couples are normal couples. They are not celebrities whose everyday life is a movie. Happy couples are the ones who survive the tiring days, the endless house work,the non stop cooking sessions, the hectic weekdays and the lazy weekends.While they are running to their workplaces, doing the dishes, vacuuming the house and refueling the car, they still find time to celebrate their love.